One such character is “The Virginian,” the foreman of the Shiloh Ranch. The show’s name is the same as the character – The Virginian ran for nine seasons from 1962-1971, and is TV’s third longest running western (second only to Bonanza and Gunsmoke). That is 249 episodes! This year marks the shows 50th anniversary, and we want to celebrate with a tribute to this fantastic western.

The title character of the show was played by James Drury. This talented actor personified the tough kindness of the foreman at the Shiloh Ranch. Click here for his biography and filmography. After being screen tested for the part and considered to be a bit too hefty, James went on a diet and lost 30 lbs in 30 days. I guess he really wanted the part!

Played by Doug McClure, Trampas is a well-loved character. A drifting cowhand who eventually settles at the ranch, Trampas’ fun-loving, rowdy personality helped balance the serious nature of The Virginian, making for a light hearted, more comedic character.

The Virginian and Trampas were the only two actors to stick with the show for all nine seasons, but there are many other well-loved characters, such as Judge Garth, Betsy Garth, John, Clay, Stacey and Elizabeth Grainger, Deputy Sherrif Emmett Ryker, and many more.

Who is your favorite character? Why? 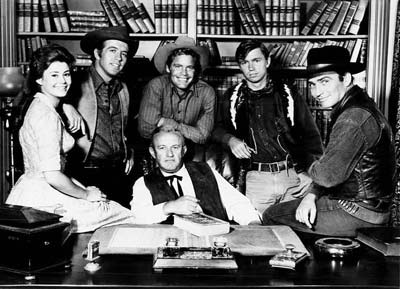 The Return of The Virginian:

Good news! The Virginian will be on-air once again. It will return September 22nd, to celebrate it’s 50th anniversary. Learn more and view the schedule.

Hear the theme by Percy Faith:

All images are Public Domain

2 thoughts on “The Virginian: 50th Anniversary”