The cowboy hat is perhaps one of the most widely recognized icons of an era and a way of life.

We see the cowboy hat in the towns and ranches of the West. We’re accustomed to it in movies. It is a symbol of individualism and freedom in a world swayed toward conformity and control.

Even within the western narrative the type of cowboy hat itself is indicative of the wearer’s character. There is the black hat of the outlaw; the hat of an person who maliciously practices their individualism for their own gain over and against his fellows. Then there is the brown or white hat of the hero; the regular-Joe who, dealt the hand of circumstance that other’s might have deemed unfortunate, uses his freedom of will to act as the protector of his fellows, even amid threat to his own personal safety.

What, then, is the origin of this powerful symbol?

What genius created such a trademark look?

That would be John B. Stetson, a prospector and cowboy in the 1850’s.

Where did the cowboy hat come from?

Mr. Stetson created the cowboy hat because of necessity born of his experience as a cowboy and prospector; he quite simply needed one. The cowboy hat’s functionality includes, but is not limited to: sun-blocker, wind-blocker, head warmer, rain-blocker, water carrier, bowl, flag, horse trough, and of course the stylish finishing touch to any and every outfit.

All that shaping, creasing and steaming – where did that come from?

The shaping of hats goes back to individual cowboys wanting to create their own unique style. It quickly beacame a “road-map” of the wearers political leanings.

John B. Stetson, who spent time as a prospector and cowboy, realized the need for a functional hat. His initial design – The Boss of the Plains – became the basis for the modern cowboy hat. 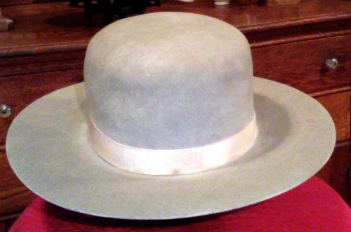 This legendary and distinct looking hat was crafted of fur felt. It could withstand whatever damage a rough cowboy or prospector could dish out. Using hot steam, the wearer could create their own style by creasing the crown and shaping the brim. Over time the crease became a “road map” of the wearer,  an identification tag of sorts. Creases became so specific, an observant person could tell from which region the wearer hailed – even which ranch he worked! Political leanings could also be discovered.

Today there are over 20 different creases available in felt hats. The style of hat a person wears can still be an insight into their personality, although specific creases are usually chosen in order to compliment a person’s face shape and height. However, if a person sports an original Boss of The Plains, chances are he or she is a Western purist. This sort of person might also wear the Tom Mix, Gus and Hesperus styles – all different takes on the 10-gallon hat of the movies and TV Shows. Also iconic: The Royal Canadian Mounty and U.S. Army Drill Instructor hat with the creases known as “Mountain Peaks.”

Modern style dictates change and variety. Cowboys today enjoy shaping brims as well as the crease.  While the Boss of the Plains is less common, newer styles that signify the modern cowboy are the Classic Rancher and Laredo, which are seen in rodeo grounds all over.

Different regions produce different popular styles. For example, the Outback crease originated in Australia and New Zealand. Variations on The Mountain Peak or 10-gallon hat, both reminiscent of the sombrero, come from Mexico and the American South West.

The cowboy hat has always been the assumed accessory. A hat is very functional as well as stylish. The symbolic quality it provides has kept it a favorite for generations throughout history. Hats today still serve as a road-map of the wearer – just like our ancestors.

If you have a question we didn’t cover here, just ask! Use the form below, and we’ll get back to you as soon as we can.